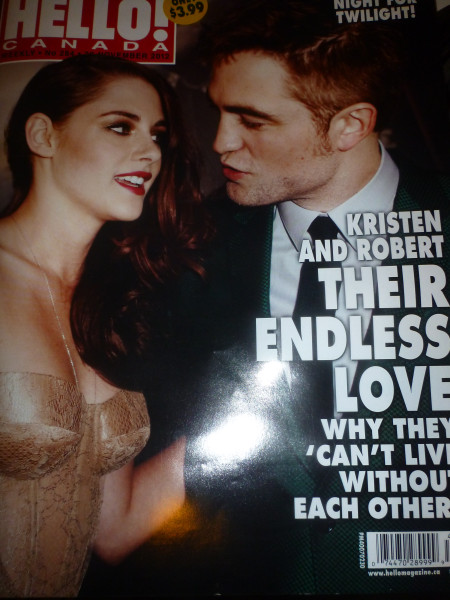 
Hearts race as the Twilight co-stars reunite for the finale and leave fans longing for a happy ending.
"The sun may be setting on the Twilight franchise, but it looks as if the relationship between stars Kristen Stewart and Robert Pattinson is as hot as ever.

Making their first joint public appearance since their emotional split this summer, the on-again off-again couple sizzled on the black carpet at the L.A. Staples Center, stepping out for the world premiere of The Twilight Saga: Breaking  Dawn part 2, the fifth and final film in the epic vampire tale.

After greeting fans separately, the pair - Kristen in a corseted gold gown by Zuhair Murad, and Robert, in a forest-green Gucci suit - posed together for photos. They smiled broadly, unable to tear their eyes away from each other. This was Kristen and Rob as we had never seen them - much to the delight of fans, who camped out for a glimpse of the couple and to say a final goodbye to Twilight.

The significance of the moment was not lost on Kristen, 22, who recently opened up to Hello! "It's strange that we're not going to be together anymore" [For movies, not their relationship]. She was no doubt glad to have Robert by her side as her was to have a partner who understands what it's like to live in the Twilight spotlight. "It's quite nice to have someone who is genuinely indifferent to the whole spectacle," he once mused.

Rob and Kristen's connection was evidant from the start - when Robert, most famous for his role as Cedric in a Harry Potter film, auditioned for the role of Edward in 2007. Los Angeles native Kristen, then 17, who had appeared in Panic Room with Jodie Foster and Into The Wild with Emilie Hirsch, had already been cast as heroine Bella.
"She felt connected to [Robert] from the first moment," recalls Catherine Hardwicke, director of 2008's Twilight. "That electricity or love at first sight or whatever it is. Kristen was like 'It's got to be Rob!'" The feeling was mutual. "She's basically the reason I did the movie," Rob said. "When I got in the room with Kristen, there was a certain chemistry."

According to insiders, the set of the first film was home to nothing more than a mild flirtation between the stars. Kristen was dating actor Michael Angarano. But she wasn't immune to her co-stars charms. "He's British," she noted. "He's tall. He always looks like he's thinking about something. And he's quite witty. So he's pretty sexy."

As time passed, they grew inseparable. On-set in Vancouver, they bonded, going to dinners and concerts. While Bella was torn between her love for Edward and her affection for Jacob (Taylor Lautner) onscreen in New Moon - the second film in the Twilight Saga - off-screen Kristen was undeniably Robert's.  Soon after the film's premiere, they were vacationing in the Isle of Wight and Robert was visiting Kristen on her film set in Montreal.

The couple have never spoken about their relationship, struggling to retain a sense of privacy. This summer though, Kristen felt compelled to break the silence, addressing reports of her liaison with Rupert Sanders, the married director of her film Snow White and the Huntsman. The contrite star apologized saying, "This momentary indiscretion has jeopardized the most important thing in my life, the person I love and respect the most, Rob. I love him,  I love him, I'm so sorry."

The fallout was swift and sudden, but in recent months, the couple, who insiders say "couldn't live without each other," have taken tentative steps to rebuild their relationship. Judging by this recent outing, they are ready to put the past behind them. While the curtain may have closed on their onscreen romance - their off-camera love story continues to unfold.
Tags: breaking dawn, into the wild, kristen stewart, new moon, robert pattinson, robsten, snow white and the huntsman, twilight
Subscribe